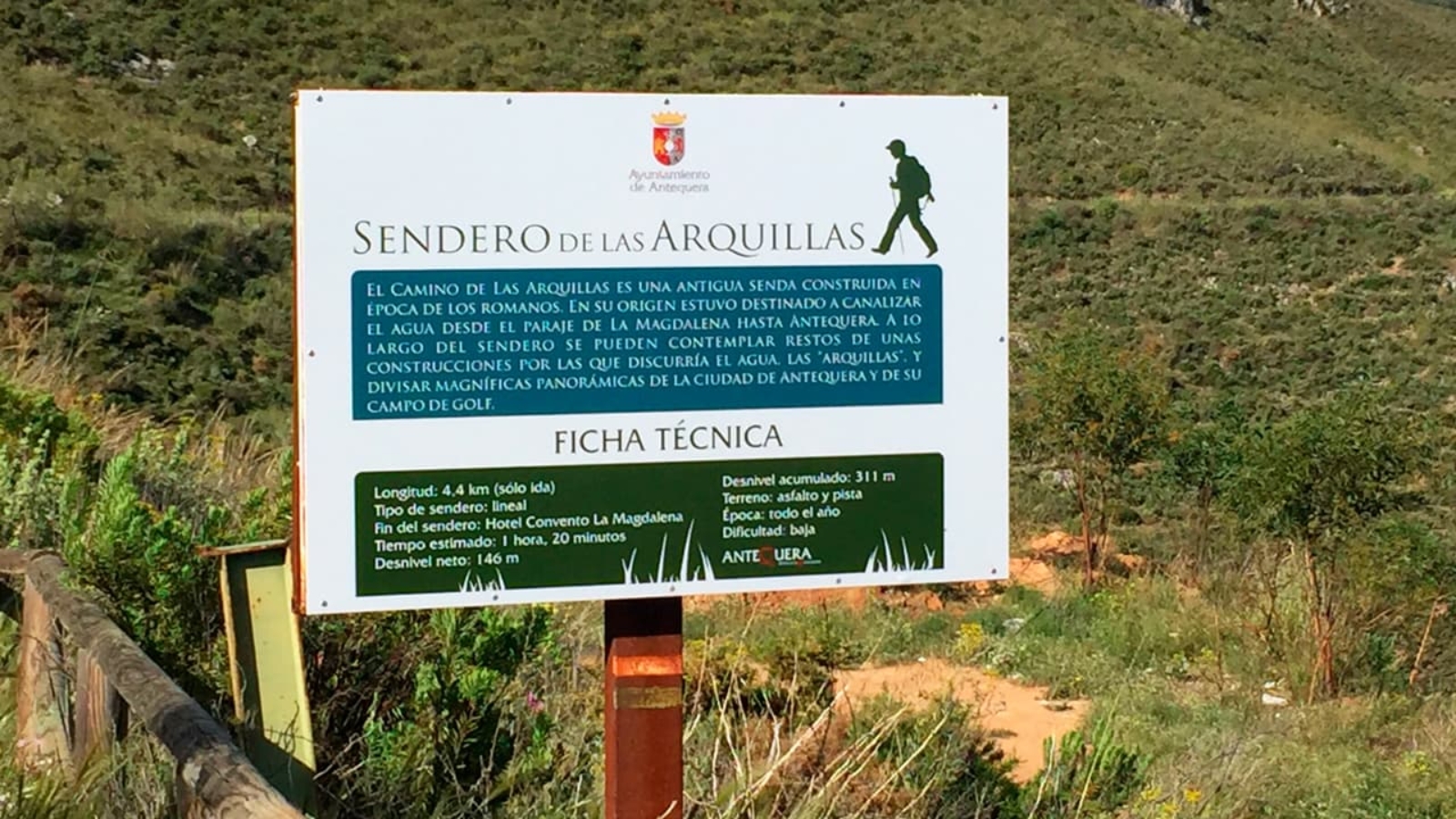 If you love hiking, Antequera offers you many different routes for all ages to enjoy countryside. Here you will find three hiking routes of 4, 10 and 14 kilometres to enjoy the best views.

The trail starts through an urban section until reaching the Mirador de las Arquillas street where starts the countryside. Here you will find a sign indication “Ruta de las Arquillas”. The original purpose of this trail was to course the water from La Magdalena to Antequera -along the trail, there is a kind of constructions named “arquillas” (small arches) by which the water went through- going pass the Torre Hacho Outskirt Park lines and the Arroyo del Alcázar stream until reaching the Convento La Magdalena.

El Camino de Las Arquillas is a former Roman trail. Originally, it was thought to course the water from La Magdalena to Antequera. -along the trail, there is a kind of constructions named “arquillas” (small arches) by which the water went through-. To go through this route, we climb up on the left from the directional sign and, after a few meters of asphalt, we find the sign of start just when the earthy line begins in a little sloped bend on the right. From here, it starts a very smooth route which goes through the Arroyo del Alcázar stream and from which you will enjoy magnificent views of Antequera and of the sport space of the Hotel Antequera Golf. The trail takes us to the Hotel Convento La Magdalena where the route finishes with spectacular views. In front, we will see the Sierra de las Chimenas and El Camorro Alto mountain ranges besides the El Torcal de Antequera and the Puerto de la Escaleruela mountain pass. To our right, we can see the Sierra del Valle de Abdalajis and El Chorro.reservoir.

How to get: From Antequera we will take the county road A-7075 until arriving to the Nacimiento de la Villa river spring, a recreational area where we can start the route.

The trail starts from the Nacimiento de la Villa, next to the medium pool, and it finishes in the Cortijo de la Torre; it goes through the Escaleruela mountain pass within the limits of the Natural Landscape of El Torcal de Antequera, and it climbs up to the Cortijo de los Navazos.

The trail goes through the limits of the Natural Landscape of El Torcal de Antequera, in concrete through the Torcal Bajo (low), an area with a little bit less attractive landscape formations than those of the Torcal Alto (high). However, it shows other aspects of great interest, such as how the people have used this area along history.

Part of the route meets the so named Cordel from Antequera to Málaga. In ancient days, it was an important pass for livestock and people to go to Antequera when coming from Villanueva de la Concepción, Almogía and Alora villages. Some sources vouch for the existence of a former Roman road in the place.

The route is both ways; that it, it can be started from any of the ends: from the Cortijo de la Torre or from the Nacimiento de La Villa river spring. From the Cortijo de la Torre, where we find the fountain with the same name, we will climb up to the Cortijo de Robledillo, the link with a way coming from Villanueva de la Conception. We will follow towards Northeast through this large plateau near El Torcal Baio by gradually climbing up to the Cortijo de los Navazos. The landscape is shaped by formations of limestone rocks such as the North side of Las Vilaneras, a fault which separates the Torcal Bajo (low) from the Torcal Alto (high) and where some birds of prey net; and the Sierra de Chimena, which is crowned by the Camorro Alto (1,369 m) the highest point of this place and where, not long ago, it was possible to see an Arabic watchtower.

We will reach the Puerto de la Escaleruela mountain pass after which this route is named. From this point, we will enjoy great views of the Antequera town, with the working fields dotted with scattered farms, the Peña de los Enamorados (Lovers’ Rock), the Laguna de Fuente de Piedra lake, Sierras de Horconera y de Rute mountain ranges. We will also enjoy an overall view of El Torcal. Once in the lane, in the crossroad, we go to the right and open a gate for livestock -remember to close it again- and after walking through a lane a little bit lost among grass, we will arrive to another gate for livestock, we cross it and link with the GR-7 (Andalucía Large Route) which is part of the European Route E-4 from Tarifa (Cádiz-Spain) to Athens ). Our route finishes in the recreational area of the Nacimiento de la Villa, at the foot of the Sierra Pelada, where a mountain spring flows with a plentiful volume of water, the La Villa stream, which is the origin of the filtrations in the deep pits and chasms of El Torcal.

This circular route starts at the Punto Limpio (recycling area) placed next to the Polígono Industrial de Antequera (Industrial area) through an asphalted road up to the Cementera; from there, there is a lane finishing in the Cantera de Áridos (aggregates quarry) where a steep climb starts; we go through a Mediterranean forest to, afterwards, go down until getting to the Arroyo de las Adelfas stream.

To cross the stream, there are a small bridge and a dyke. Once on the other side, we will follow a narrow trail during 4 km. This is a very nice part as we will enjoy spectaculars panoramic, such as the northside of the Sierra de El Torcal, narrow lanes, wealth of vegetation… we will have to cross the stream twice or three times; however, as there is little water it is easy if we use the rocks as support. We will find some ruins and, finally, we will get into a pretty pine groove.

After 5 km of the beginning of the route, we will get into a wide earthy line with views to El Torcal and the Sierra de las Cabras mountain range. This open lane goes in zig zag through several ups and downs sections, and it will take us to the start point of the route.